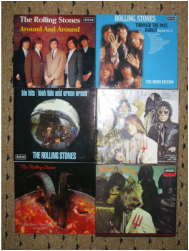 A Series of Recent Compact Discs that will become collectable as vinyl bootlegs of old. Rerolled, repressed, repackaged and still ……
(I Can’t Get No) Satisfaction
Over the past decade the UK market has been flooded with a range of variously packaged and repackaged versions of the Rolling Stones first 16 albums, official and otherwise. From the original Decca/ABKCO releases to the remastered SACD standard Jewel Case editions these offer little extra in the way of value. Even the well presented Card sleeve Digipak Japanese imports flooding the high street fall down as they include nothing new and are slightly too big for your CD Shelves at home! All these in an already saturated official release Stones Market. However over the past 5 years, almost unnoticed, there has also been a plethora of truly classic Stones reissues from a less official (and perhaps less mercenary) source. Despite the fact that they are bootlegs the albums in question are lovingly reproduced with scarcely a flaw. Devotedly repackaged in Gatefold Digipak form they appear almost legitimate. The boast original artwork (front and back sleeves) on the cover with well presented lists of all the tracks, including the exciting bonuses. And it is these bonuses that make the albums worth hunting down. Granted many of these tunes have appeared on and are easily available on other bootlegs or even some harder to find official releases. For example the bonus tracks on No Stone Unturned are merely B Sides from their 60’s singles. But, as if to prove the point, slipped in amongst them is a stereo mix of ‘What A Shame’. As well as the unreleased track ‘High Healed Sneakers’.
So devoted is the restoration of these CD’s that there is even a copy of Around and Around – the hard to find German LP. But to ensure the buyer is not left short changed this comes with the British EP Tracks as bonus!

Big Mistake
Whilst every care has been made to make certain these CD’s conform to an excellent regularity – it is hard to tell that some are not official – there is an unfortunate degree of overlap from one CD to another and some omissions that would benefit the set. Instead of electric and acoustic versions of ‘Family’ for Beggars Banquet we have only the weaker electric version. Whilst ‘Dideverybody pay their dues’ (aka Street Fighting Man) on that album is the same version which is on Through the Past Darkly in the series. Similarly a handful of simple spelling mistakes (‘Dear Docto’) tarnish this otherwise perfect collection.

However like the band themselves, who are only too willing to use ironic humour, certain omissions may be deliberate. Not listed but included as a hidden bonus track on Through the Past Darkly is the 7” Mix of ‘Brown Sugar’.

Copy Cats
In a sublime case of imitation being the highest form of flattery the creators of these wonderful digipaks have themselves also taken to bootlegging the bootleggers. The series appears to include at least 2 classic live sets first released in the 70’s. The Semi Legal ‘Insect Records’ In Action has been reproduced with similar artwork. Whilst  Live in Honolulu in 66 followed by the Olympia theatre shows in 66 & 67 are as good a sound as you will find anywhere. The Famous Paris 17/4/65 concert is available as a bonus to Got Live If you want it digipak – far better quality than I have heard available elsewhere, though a different, and probably corrected, running order (Hey Crawdaddy as encore).

But the crème de la crème has to be the Ladies And Gentleman from the 1972 bootleg of bootlegs. Counterfeits don’t get much better than this.  Recorded across America for the now infamous video, the quality is not 100% - but it certainly captures the excitement of an electric live act in 1972 (and some great art work to boot). The track list reads like a Greatest Hits (Rocks Off, Midnight Rambler & Jumpin’ Jack Flash).

It is fascinating also to hear Mick starting to build in confidence as a stage performer as well as trying to perfect his American southern drawl!

You Can’t Always Get What You Want
Ultimately these CD’s are going to be hard to locate. But the 2 highlights deserve to be sought out: Let It Bleed & Sticky Fingers They are not only 2 albums from the Stones most creative period, but are also available here with high quality bonus tracks. Let It Bleed contains the full Mono version of the album, complete with a copy of the inner mono sleeve (Red) as the inner gatefold. As if that was not devoted enough the bonus tracks are the hard to find versions of many classics such as ‘Gimme Shelter’ with Keith on Vocals and ‘You Got The Silver’ with, you guessed it, Mick on vocals.

All beautifully wrapped in Delia’s cake: true to the original.

The Sticky Fingers release brings us the hard to find Treacle Tin sleeve (Spanish) complete with the Spanish Track not included on the British release (‘Let It Rock’).  Alongside ‘Good Time Woman’ (Tumbling Dice) are other tracks that are only available on hard to find bootlegs. These include ‘Travellin Man’, ‘Potted Shrimp’ and ‘Aladdin’s story’ plus ‘Leather Jacket’. But more exciting are the rehearsal versions of ‘Wild Horses’ – Keith and Mick in 69 as well as, more importantly, an excellent version which it is claimed is with Gram Parsons on Pedal Steel guitar.

Four versions of ‘Brown Sugar’ make this perhaps a bit on the fanatical side for the passing fan, but definitely rewarding for everyone who is actually after these albums with more value – rather than glossy reissues.

Don’t Lie To Me

Although there is always speculation as to the source of many albums of this nature (from the sources close to the band, to even members of the band) – these seem most likely to be the work of at least one truly devoted fan, with connections. Who ever it is they have lovingly worked on these collating these tracks and taking the time to put them in near chronological order, as well as sourcing popular or sought after bootleg tracks. Such commitment deserves reward. A reward that ABKCO and with later issues even the bands more recent labels could have reaped the reward.

There was even a claim that these discs were due to be released (and even came out in Germany), apparently assembled by ABKCO themselves with the bonus tracks. But then were later scrapped and replaced by the 2003 SACD releases instead. The reason it was claimed was to save on paying royalties for the bonus tracks.  This seems very unlikely, but if it was true would be amazing!

Each CD has on average 7 bonus tracks which are different mixes or unreleased takes. Incredible sound. Many of the early albums were recorded and intended for mono.

Enclosed is a full list of the Digipaks known to exist but I get the feeling not exhaustive and may change all the time  – however if readers know of any others – please let us know. 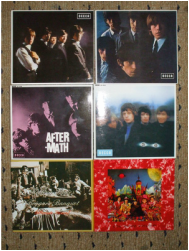 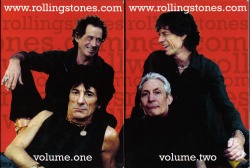 Rolling Stones 4 DVD  Set Exclusive 'Rolling Stones .com', MINT
This is truly awesome collection of well over 8 hours of NEVER seen before
footage. 4 DVDs of lovingly collected material including everything from
the Four Flicks Dvd Trailer to Kiss confessing to stealing all their licks
from Keith!
I am one of the Stones biggest fans, I have met them, interviewed them (see
previously sold signed items) and consider myself to have a near complete
collection but this is an import item I have never seen before and to my
knowledge is only available in this format.
Here is a collection of truely exclusive items - just read the track
listing. Any problems reading it - let me know and i'll email a copy. There
are 150 tracks including 'Making of' footage plus on stage guest
performances from AC/DC, Guns and Roses, Sheryl Crow and others.
So this is a rare chance to obtain items spanning much of their still going
career on 4 DVD's.
I was amazed firstly that some of this existed, secondly that it is so
nicely packaged - in a well edited 4 disc edition.
I am amazed and just over the moon I have managed to get a copy of this.
Indeed if you have any information on this and if I can get anything else as
thorough or well presented on disc - please let me know.
Any queries or for more information, please do not hesitate to contact me.
They play perfectly and are a joy to watch!
For Sale only £29.99 per set include P&P.
To buy a copy of this - simply send paypal payment or enquiries to spincity33@hotmail.com