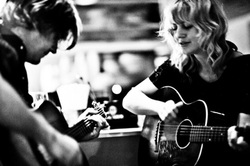 Celebrated American songwriter and her old friend team up for a timely revisiting of olde worlde folk ballads.

Anais Mitchell and Jefferson Hamer didn't make it to Dunfermerline this time around, Edinburgh was the furthest North they came on this this short tour of Britain (they had made Glasgow for Celtic Connections back in January). But that didn't stop them celebrating in song both the former capital (Sir Patrick Spens) and the Clyde (Clyde Waters), in this short celebration of their newly released Child Ballads collection. As yet unreleased in the US but readily available in the UK, the album was gratifyingly well received by this respectful and attentive crowd.
Anais Mitchell has enjoyed some success with her classic Folk Opera Hadestown and the title track from Young Man In America, whilst, Jefferson Hamer, the talented other half of the duo throughout this tour is largely unheard of. The duet itself though works well for these slightly outdated folk songs: her nasal, almost Mini Mouse-esque style, alongside his equally high pitched vocal (very Neil Young) gave these ancient songs an added balladic feel. Although enjoyable, the insistence to staying true to earlier interpretations of the ballands felt a bit bland at times and some could have done with a revamping - perhaps most niceably Riddles Wisely Expounded (actually Child ballad 1! - all being numbered originally by  Francis James Child). However others borrowed directly from the 60s revivial as well - most noticably Geordie and the pan-British Willie's Lady, inspired loosely by Martin Carthy's '70s versions.
Some of Mitchell's old material surfaced as well, with Hamer filling in admirably for Justin Vernon on the Wedding Song. But this evening also proved to be a vehicle for the less well known Hamer  - his own This Ragged World we Spanned and his former band's The Old Church Yard were both haunting and well received.
The encore saw them return closer to home for an off mike crescendo of their own brand of pure American folk (US Country that is) in the form of Gram Parson's and Emmylou Harris's Hearts On Fire. A sweet finale to an evening of fine song.

Tonight John Prine gave us a solid set - very much steeped in the current book ends of his career. Starting firmly in the early 70s - the self titled debut LP from 1971 - when he was still being heralded as the 'next Bob Dylan' through to the less heralded and more gravely vocalled Fair and Square from 2005.  Opening with the memorable instruction to Blow up the TV Spanish Pipedream Prine's lyrics capture the everyman in the audience as well as the dreams hopes and ambitions we all harbour. Captivating from the start Prine and his duo Jason Wilber (Guitar) and Dave Jacques (Bass) gave a performance to enthrall  However it was the follow up track, from a later album which offered the most astute lyrics of the night - ("the white man sits on his fat can, And takes pictures of the Navajo. Every time he clicks his Kodak pics, He steals a little bit of soul.) Sympathetic and sharp. The most popular early number was the pseudo macho anti war song Your Flag Decal Won't Get You Into Heaven, as relevant today as when it was released in 1971 (if not more so!) Such an anti war tone is no surprise at a Prine gig and later on we were treated to probably his most famous couplet - which inspired Pink Floyd as well as Spiritualised "There's a hole in daddy's arm, where all the money goes" in his homage to a wasted Marine - Sam Stone.
Prine struck the right balance between sincere anti war (without being preachy) and  humourous - including funny but poignant tracks like Dear Abby, made more relevant by the death of Abby herself (Pauline Phillips) the month before. Though Prine made no reference to this, instead he made reference to his own cold and the benefits of benylin! But that doesn't stop him performing a few tracks solo - including Clay Pigeons. Back as a trio for the well received encore saw the sound at its most effective - the relatively anonymous songs like Lake Marie on album given added gravitas and feeling from the trio.
Perhaps not surprisingly also was his most popular and successful song Speed of The Sound Of Loneliness - reserved for the encore. No Nanci Griffith though - instead the sparing role was filled by local stalwart Philip Donnelly. A great night - John Prine seemed to enjoy it throughout - so did the crowd.