Have  a Drink on me. (As AC/DC said, but Angus still owed me that pint. Tight Scottish b.........). So instead of a photo of Angus playing some mad solo to Whole Lotta Rosie, Here is a photo of my mum enjoying a pint of guinness! For Those About to Drink, We Salute You! 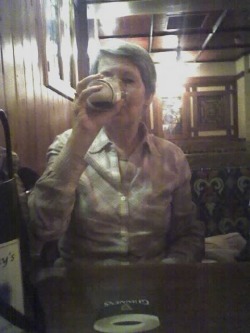 Hey, check out these live reviews from 2006. Some great gigs here, Enjoy. As ever any feedback do not hiesitate to contact me!

Balcony, Stage right. Too far from the mosh pit!!

Iron Maiden were sharp and precise tonight, as they performed a note perfect set heavily weighted on this years best selling album: A Matter of Life And Death. Indeed it was played in its entirety, which unfortunately hindered rather than complimented an otherwise faultless show. For a band who regularly take risks this was not one of their better decisions - some of these songs may find their place in future sets but even younger members of the loyal crowd grew tired of current album tracks and erupted in unison when Fear Of The Dark gave rise to the finale of the show. Four classic tracks from the 80’s followed as an encore (including Iron Maiden and 2 Minutes to Midnight). Admiration for the band for sticking to their guns but another disappointing aspect of this tour is the lack of imagination even with regard to the classic tracks which have been the same for most of the dates. Let’s have a few new exciting inclusions (Flight Of Icarus or Flash Of The Blade) – but even with out this the misjudged track listing would have benefited from a few more solid classics interspersed.

For a band who tour UK & ROI twice a year and had already performed 12 shows in last 2 weeks, the first few tracks of this evenings gig felt decidedly flat – they were hits (Love Action & Love is the Reason), but still Oakley seemed to be trying too hard whilst the girls(  ) and the band were very unsure of themselves and the sound. But this seemed to evaporate with Mirror Man, there then proceeded a set peppered with popular chart classics from the last 25 years. The Christmas Party atmosphere was in full swing before the obvious climax – but had proved before then that despite many assumptions they were not a one trick pony. The audience were ecstatic with the entire set and quickly demanded an encore – the unlikely ‘Tall’ followed by Oakley in full swing across every inch of the stage for Electric Dreams.